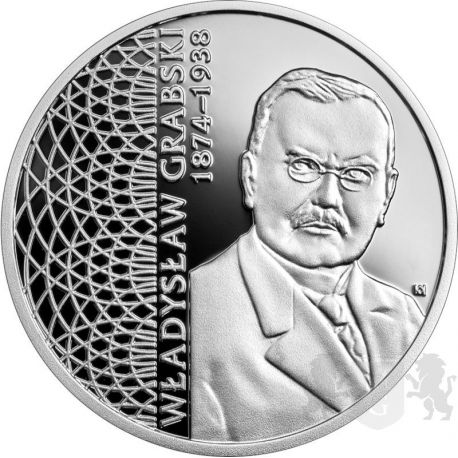 Władysław Grabski was a Polish National Democratic politician, economist and historian. He was the main author of the currency reform in the Second Polish Republic and served as Prime Minister of Poland in 1920 and from 1923 to 1925. He was the brother of Stanisław Grabski and Zofia Kirkor-Kiedroniowa.

He was responsible for the creation of the Bank of Poland and implementing the Polish złoty. Grabski's cabinet became the longest standing cabinet in interwar Poland. At the same time, however, Grabski's cabinet was severely criticized. Stanisław Głąbiński, for example, criticized Grabski's inefficiencies in the sphere of international relations, and Wincenty Witos disapproved of Grabski's deficient agricultural reform, as well as his inability to inform the public of the state's real financial situation.

The reverse of the coin features an image of Władysław Grabski and the dates of his birth and death. The obverse features a quotation from the article Public education as a factor of economic sanitation, from the work O własne siłach. A collection of timely articles