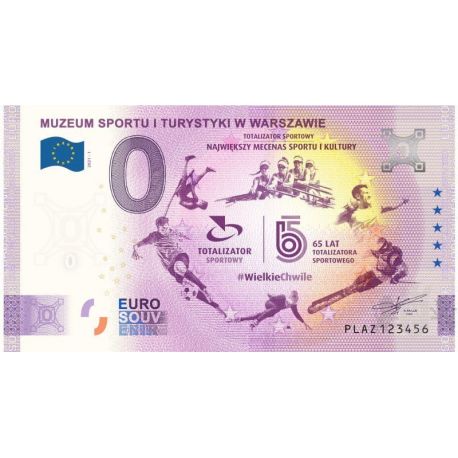 The 0 Euro Souvenir banknote is a project that was launched in 2015 in France and has spread throughout Europe. The banknote is made of 100% cotton paper, which is the same paper as the original euro banknotes. It contains many safeguards against forgery, including hologram, watermark, microprint, UV protection elements etc.

..Totalizator Sportowy'', owner of the LOTTO brand, has been operating continuously for 65 years. The company, which was established on January 25, 1956, is also an institution that has permanently entered the lives of millions of Poles. Initially, it was established to collect funds to finance the renovation and construction of sports facilities and equipment in post-war Poland. Over time, it was responsible for transferring funds to the broadly understood national culture. Today, Totalizator Sportowy is one of the most important pillars supporting both sport and culture in Poland. Over the decades, funds systematically transferred to the state budget have allowed for the construction of stadiums, sports fields, swimming pools, indoor ice rinks, gyms, sports halls, canoe tracks, tennis courts, ski jumps and ski runs. Totalizator Sportowy contributed to the construction and maintenance of such legendary facilities as Spodek in Katowice, Silesian Stadium in Chorzów, Wielka Krokiew in Zakopane and Arena in Poznań.