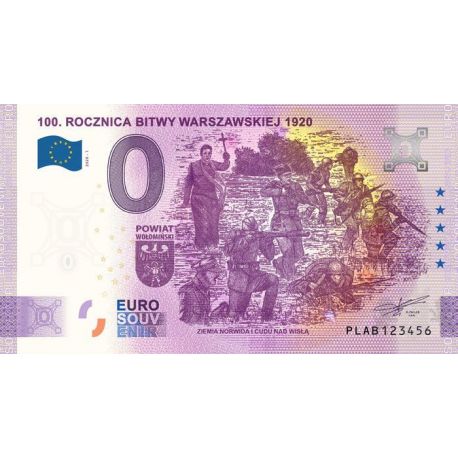 ATTENTION: Due to the huge interest, from September 1st the price will be 99,00 PLN!

Polish issue of a 0 euro note! A unique 0 euro banknote dedicated to the Battle of Warsaw!

The Battle of Warsaw was a turning point in the war with the Bolsheviks. Victory was hailed as a Miracle on the Vistula River and help in its success was attributed to the care of the Blessed Virgin Mary, whose feast of the Assumption fell on the climax of the struggle. The merits in terms of command should be attributed both to Commander-in-Chief Józef Piłsudski, Chief of Staff General Tadeusz Rozwadowski and General Władysław Sikorski - the commander of the 5th Army, Józef Hallerow - the commander of the Volunteer Army fighting in the foreground of Warsaw and Maxime Weygand. The victory was possible thanks to the unification of the nation and the sacrifice of the Polish soldiers holding back the Bolshevik invasion.