Greek mythology in a modern version!

Greek mythology still inspires many of us today. Characters known from the myths and beliefs of the ancient Greeks now feature in modern pop culture. Collecting is no different - we present two new coins of the Mint of Gdansk, Daedalus and Icarus and Jason and Chiron, dedicated to Greek mythology.

Coins dedicated to various religions or mythologies have been enduringly popular for years. Beliefs have been connected with man since the beginning of the species. Rich and diverse collections of gods, deities and heroes are an excellent source of inspiration for many coinmakers. Coins with motifs known from Greek mythologies are particularly popular. This mythology is the inspiration for many novels, films and TV series known from pop culture. Coins, the reverse of which is decorated with Greek gods and heroes, very often gain in value. An example of this can be such coins as Poseidon from the series "Gods of Olympus" (issue price in 2014 - 600 PLN; price in May 2022 - 1600 PLN), or Ares - God of War (issue price in 2017 - 1000 PLN; price in May 2022 - 8000 PLN!).

Two coins opening new series, related to mythological themes, have also already seen their value increase. There are only a few last pieces left from the mintage, so it is worth hurrying up with your decision. 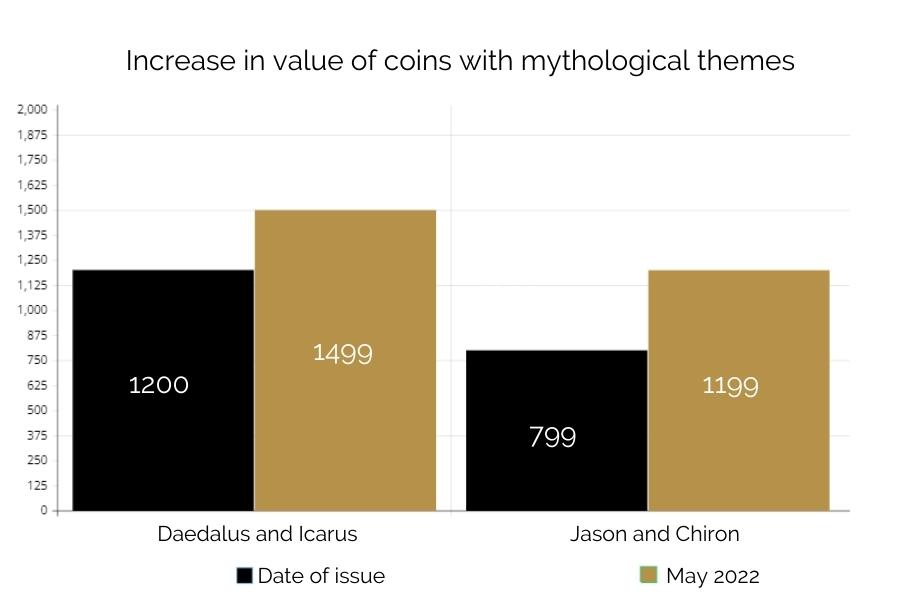 Daedalus and Icarus are characters from Greek mythology. Daedalus was an accomplished craftsman, working at the court of King Minos of Crete. His sculptures were so perfect that the inhabitants said they were alive. One of the major tasks that King Minos commissioned Daedalus to do was to make a labyrinth for the Minotaur.

Daedalus was not from Crete and missed his homeland of Athens very much. However, the king forbade him to leave the island because Daedalus was too valuable to him as a craftsman and knew too many of the king's secrets.

The artist could not escape either by land or sea. However, he found a way to leave the island. He made wings for himself and his son Icarus from bird feathers glued together with wax. Before fleeing, he instructed Icarus that he must not fly too close to the sun, as the wax would melt, nor too close to the water, as the feathers would stick together. At the moment of flight, Icarus became enthralled with flight and forgot his father's advice. He flew too close to the sun, which caused his wings to melt and Icarus fell into the water. The distraught father found his son's corpse. He named the nearby island Ikaria in his honour and the sea in which he died Ikarian. After this event Daedalus did not return to his homeland, but stayed in Sicily, where he became a builder. After a few years Minos tracked him down and attacked Sicily, but he suffered defeat and Daedalus stayed on the island for the rest of his life. 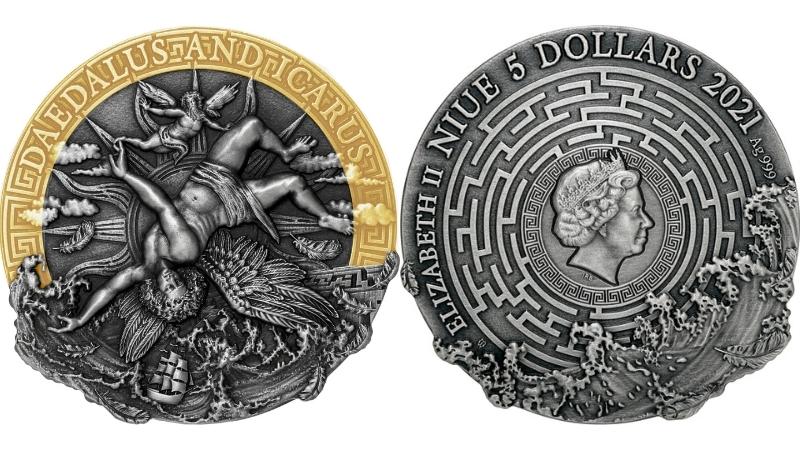 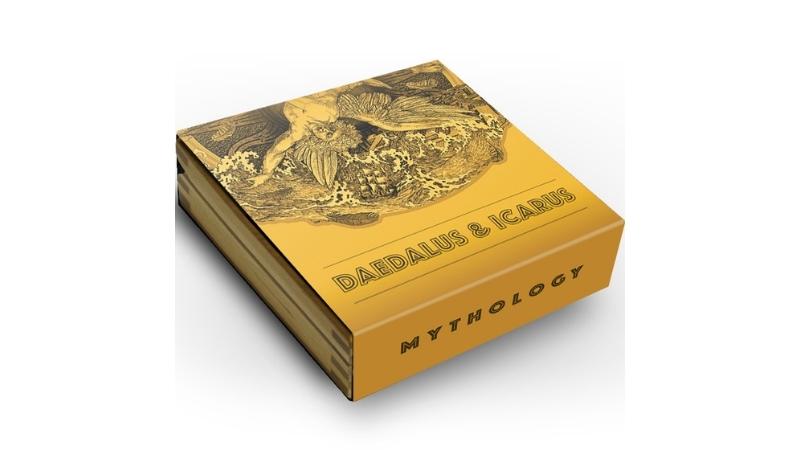 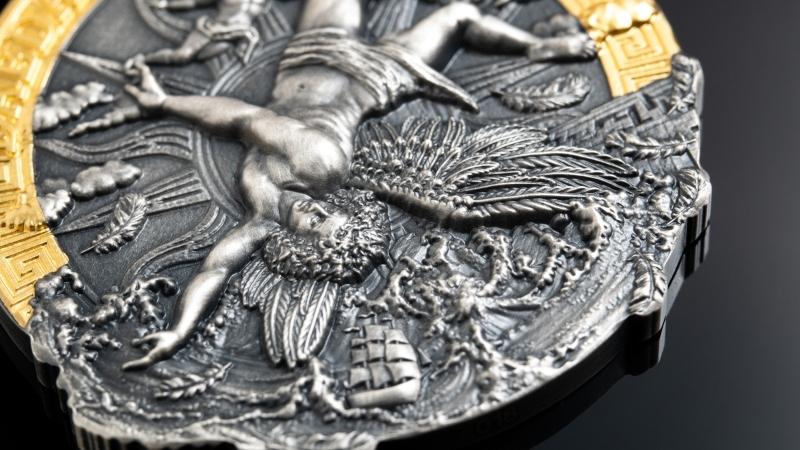 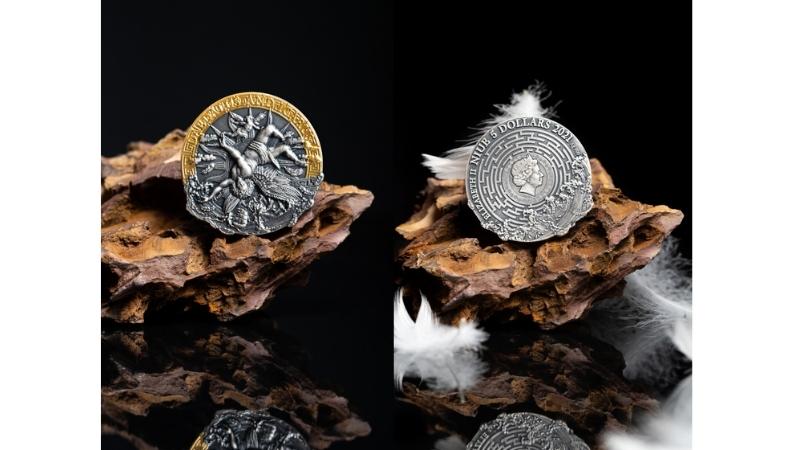 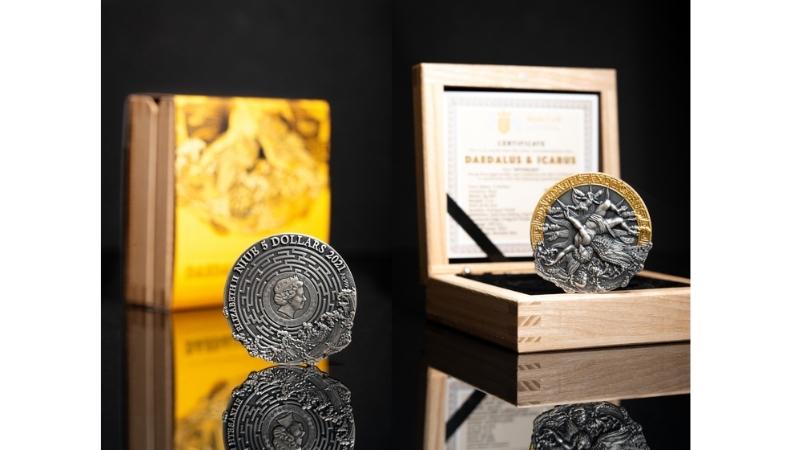 The coin is stunning in high relief! It was struck from 2 ounces of pure silver, then oxidised to give it an antique finish. Selective gilding highlights the important role of Jason. The mintage is very limited with only 500 pieces. The coin is packaged in an elegant wooden box along with a certificate of authenticity.

The Argonauts were a band of heroes in Greek mythology, who in the years before the Trojan War accompanied Jason to Colchis in his quest to find the Golden Fleece. Their name comes from their ship, Argo, named after its builder, Argus. They were sometimes called Minyans, after a prehistoric tribe in the area.

Jason was an ancient Greek mythological hero and leader of the Argonauts, whose quest for the Golden Fleece featured in Greek literature. He was the son of Aeson, the rightful king of Iolcos. He was married to the sorceress Medea. He was also the great-grandson of the messenger god Hermes, through his mother's side.

In Greek mythology, Chiron was held to be the superlative centaur amongst his brethren since he was called the "wisest and justest of all the centaurs". 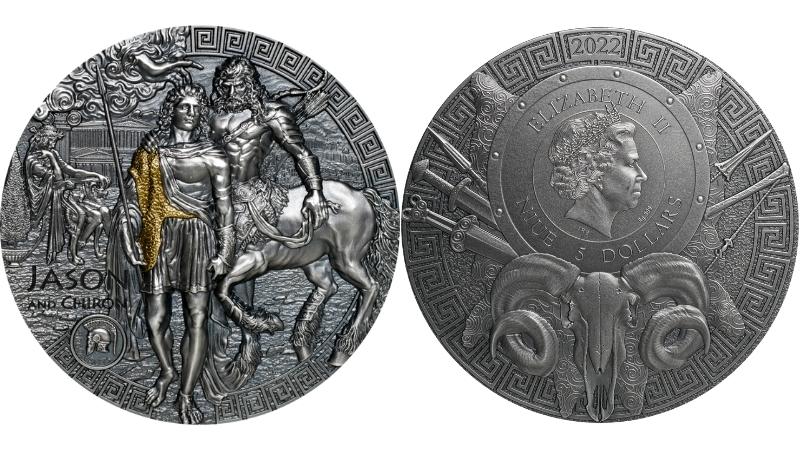 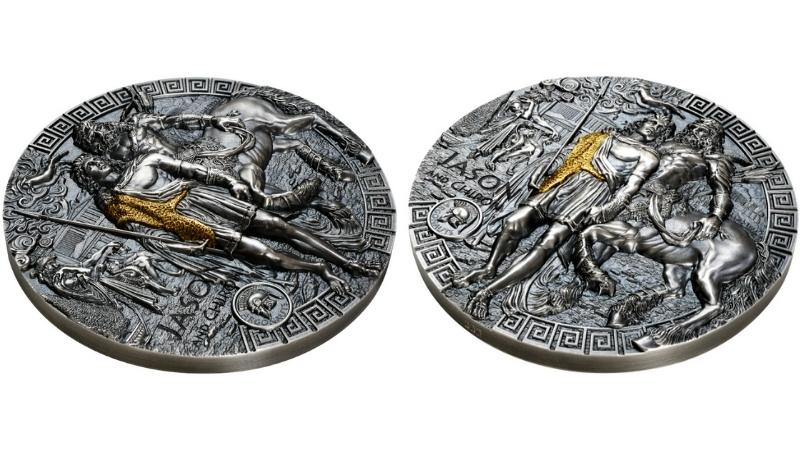 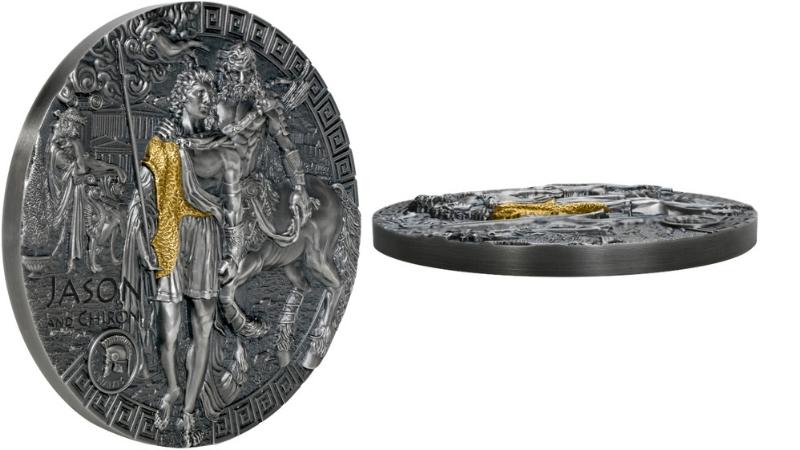 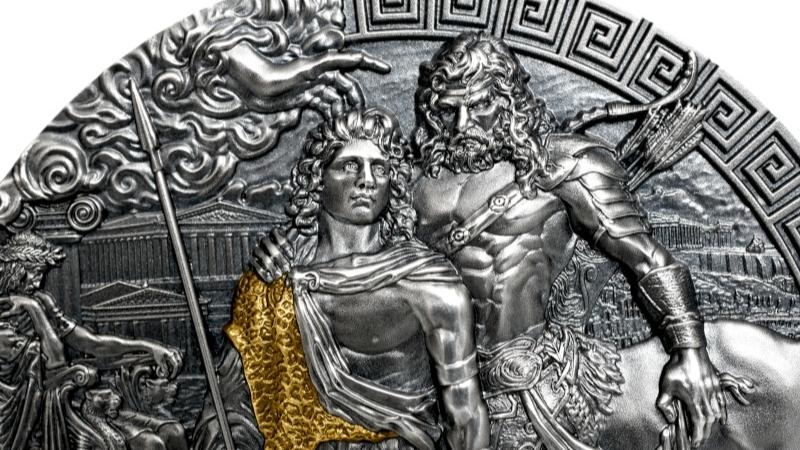 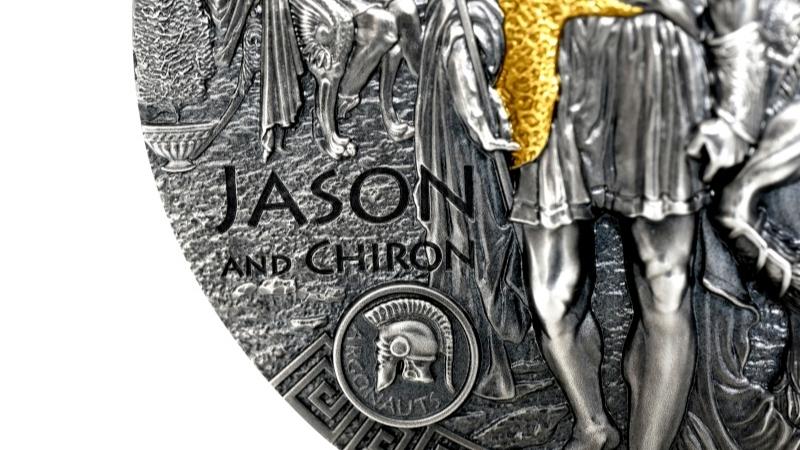 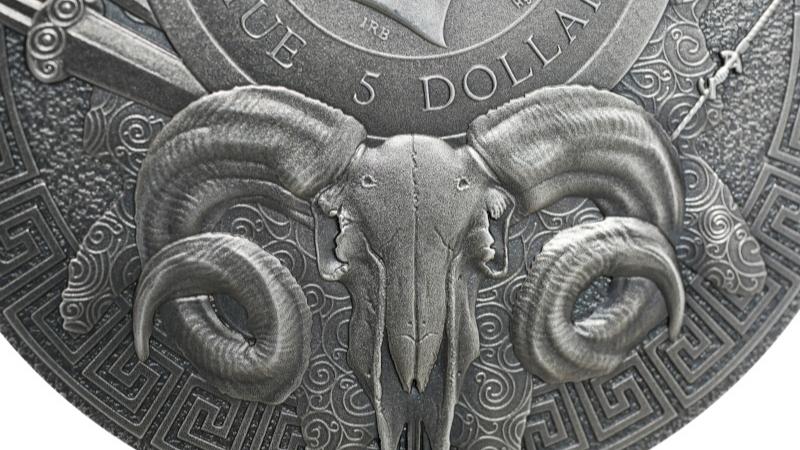 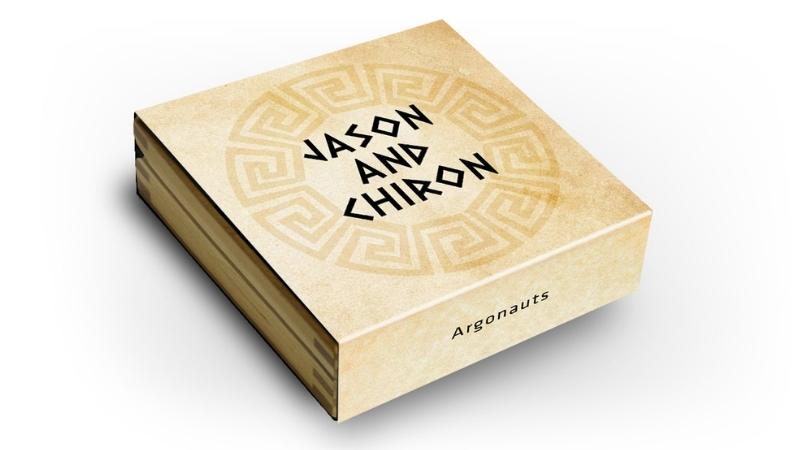 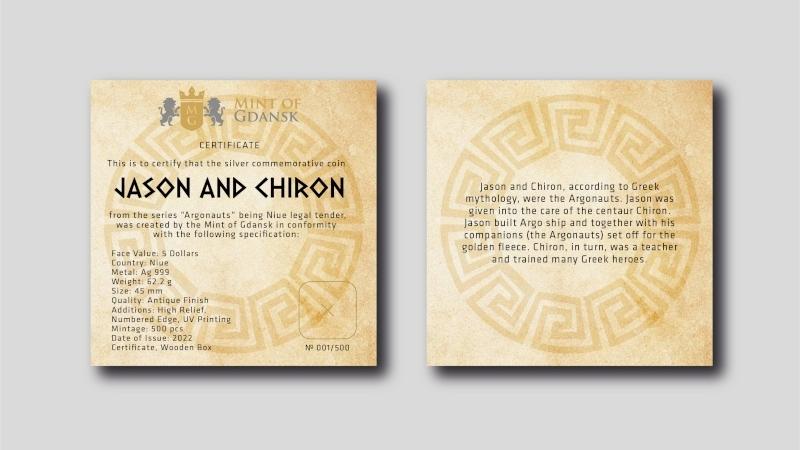 We also encourage you to watch the promotional video of Daedalus and Icarus!