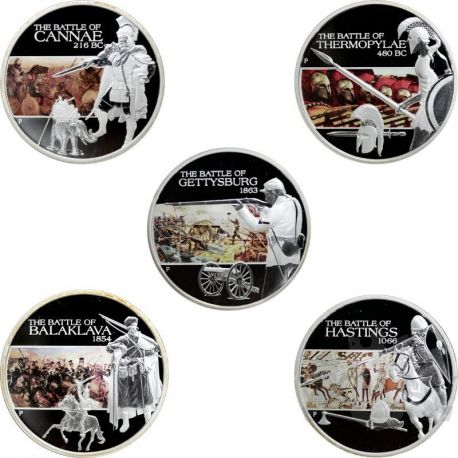 Set of 5 coins struck from 1 oz fine silver. 4 coins belong to the series "Famous Battles in History" and 1 coin was struck to commemorate the 300th anniversary of the Battle of Poltava.

The Battle of Thermopylae - a clash between Greek and Persian armies in August 480 BC on the narrow Isthmus of Thermopylae during the Second Persian War. This insignificant episode in a series of wars - fought from the Ionian Revolt and the First Persian War to Alexander of Macedon's conquest of Persia - has become entrenched as a symbol of the sacrifice of life on the battlefield.

The Battle of Hastings - the decisive clash fought on October 14, 1066, during the Norman invasion of England between the Norman army under William the Conqueror and the Anglo-Saxon commoners and guards commanded by King Harold II. The Battle of Hastings is considered to be one of the most decisive battles in the history of the world, as it resulted in the conquest of the whole country by the invaders from the European continent.

Battle of Balaklava - an armed clash that took place on 25 October 1854 between allied British-French-Turkish forces and Russian troops during the Crimean War. During the battle the main role was played by the cavalry of both sides. In total, four cavalry charges took place during the battle, the most famous of which went down in history as the "Charge of the Light Brigade".

The Battle of Cannae - the greatest victory of the Carthaginian army over the Roman army during the Second Punic War. The two armies clashed on August 2, 216 BC at Cannae in Apulia. Thanks to the use of innovative tactics Hannibal's less numerous army won a crushing victory over the army commanded by Lucius Emilius Paulus and Terentius Varro.

The Battle of Gettysburg - was fought July 1–3, 1863, in and around the town of Gettysburg, Pennsylvania, by Union and Confederate forces during the American Civil War. The battle involved the largest number of casualties of the entire war and is often described as the war's turning point due to the Union's decisive victory and concurrence with the Siege of Vicksburg. Union Maj. Gen. George Meade's Army of the Potomac defeated attacks by Confederate Gen. Robert E. Lee's Army of Northern Virginia, halting Lee's invasion of the North. 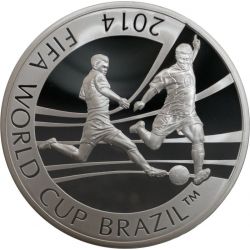 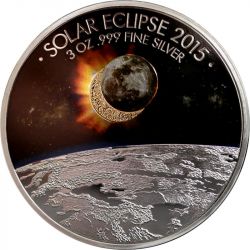