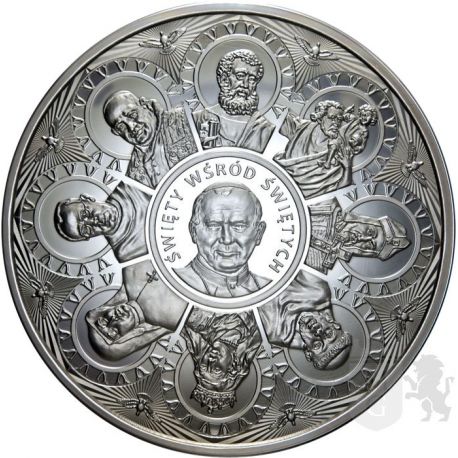 The Treasury of the Mint of Poland presents the one and only edition of the timeless coin with the face value of 500 dollars – THE SAINT AMONG SAINTS. The coin was issued by Niue Island and struck in the Mint of Poland on the occasion of canonization of Pope John Paul II. It was minted in 4-kilogramme silver of the highest purity in limited mintage of just 58 pieces, which symbolizes the age at which Karol Wojtyła was elected the Pope. It is a remarkable gift commemorating this one of the greatest Poles of all times and the significant event of making him a saint.
The beatification crowned the apostolic journey of John Paul II. Undoubtedly, his canonization has its symbolic meaning, not only for Poland but also for the Church and the world which he changed during his whole life being the testimony of sanctity. His extraordinary deeds and pontificate led to his canonization.

REVERSE: The reverse of the coin depicts a portrait of John Paul II. Along the rim – an inscription in Polish: „ŚWIĘTY WŚRÓD ŚWIĘTYCH” (The Saint among Saints). In the external rim – images of Saints as follows: St. Peter, St. Christopher, St. Adalbert, St. Francis, St. Jadwiga, St. Faustyna, St. Maximilian Kolbe and St. John XXIII. The background is embellished with ornaments of diverging rays featuring images of white doves.

OBVERSE: In the central part – a profile portrait of Her Majesty Queen Elizabeth II. Below – the hallmark: Ag 999,9 and the mint mark: m/w. In the rim – inscriptions: ELIZABETH II, NIUE ISLAND (the issuer), 500 DOLLARS (the face value) and the year of issue: 2014.